A couple months ago I was doing some googling to try and find an all vegetarian food festival. I had gone to my first proper food festival back in September at Feast Portland and it was awesome. The only thing that would have made it better was being all veggie friendly.

This is how I came across the Los Angeles Vegan Food and Beer Fest. The rest is drunk munchie madness.

They rented out a lot across the street from The Roxy Theatre on the Sunset Strip in West Hollywood. You could see the 50 or so food and drink tents from the street when you drove up. Getting in was pretty easy, I had to wait in line for about 10 minutes to exchange my ticket for a wristband which gets you in and gives you unlimited beer (one of my favorite two word combinations).

Once your inside you got a small glass, maybe 1/2 a normal size class. The next step is to fill it up as fast as possible. I started off with a solid IPA, then I proceeded to walk around to scope the food situation and prioritize my feasting. 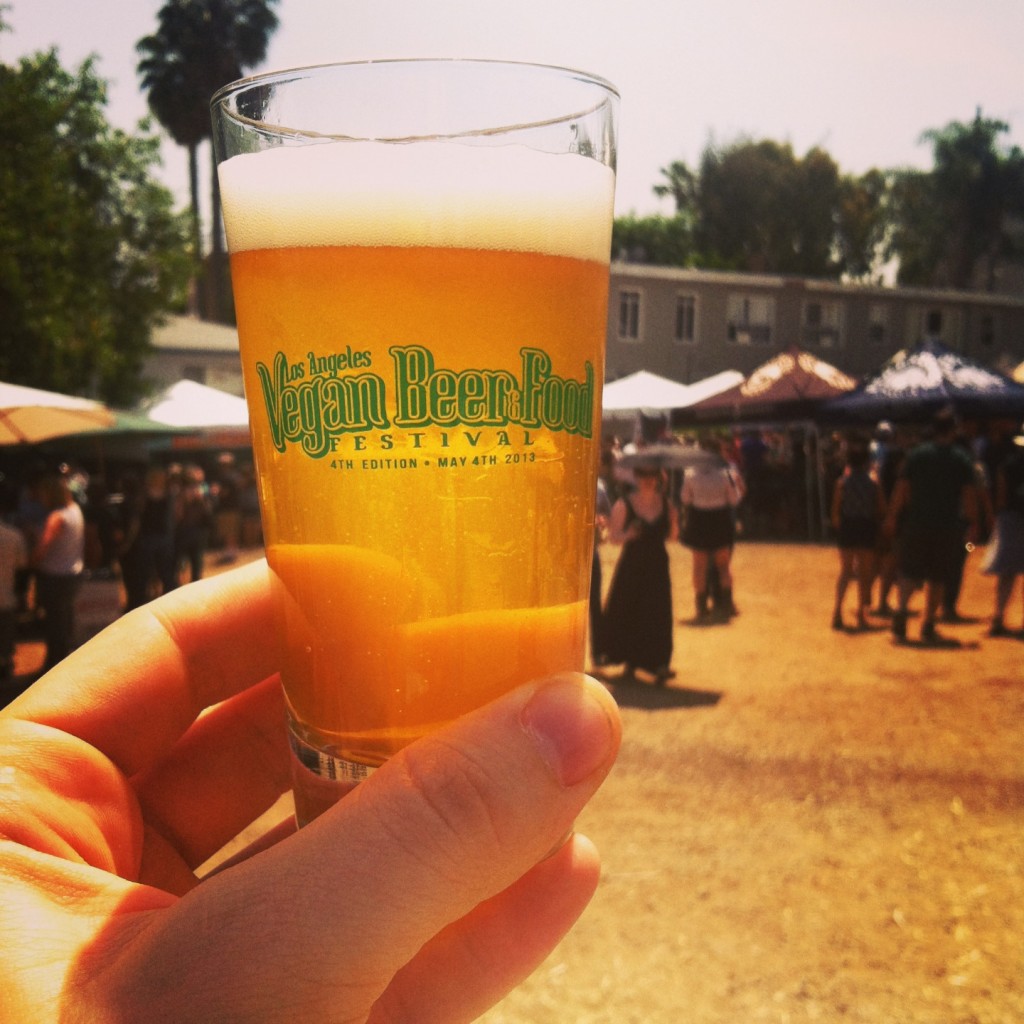 Tastes so good in the sun.

Not surprisingly, I stopped at the first food station without a line. It was Mohawk Bend and they had this awesome cold soba noodle salad with fried onion crunchies and English peas. Best part was that it also came with a free horchata cake. Yes. A horchata cake. If you don’t know horchata, it’s this awesome Mexican drink made with rice and seasoned with vanilla, cinnamon and other greatness. It’s really good and even better combined in cake form. 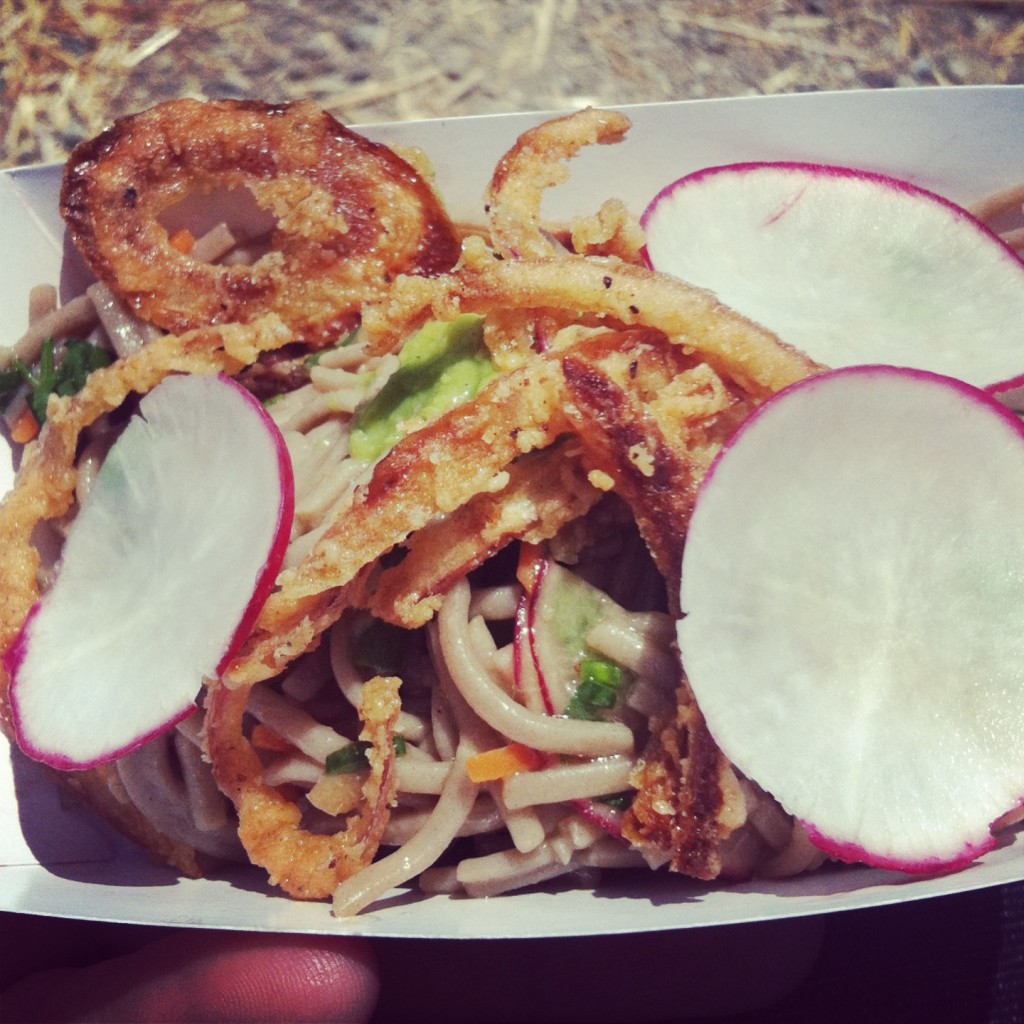 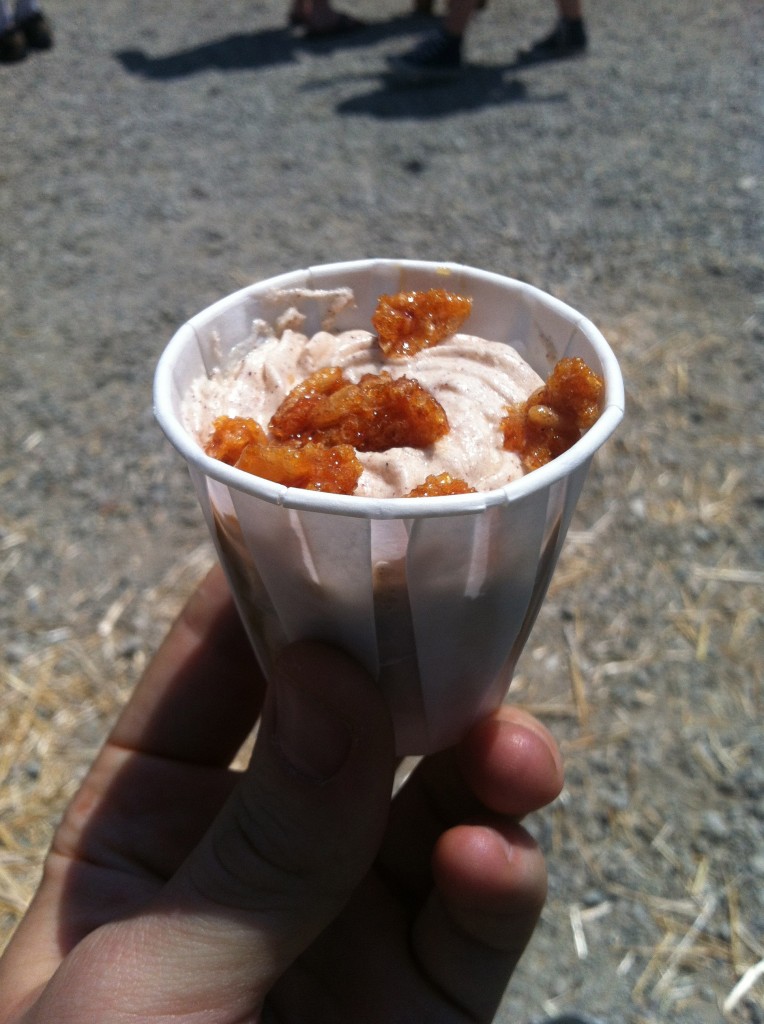 The icing was horchata flavored and underneath in the cup was proper cake. No clue what the delicious crunchies were.

All in all there were about 50 vendors total split between beer and food. The beer was mostly craft with some more recognizable names than others. I went for a few of my tried and true favorites (Drakes, Anchor, etc.) and also peppered in some that I had never had before (Deschutes and Monkish for example).

Here is an image of the flyer from their site with a list of who was there: 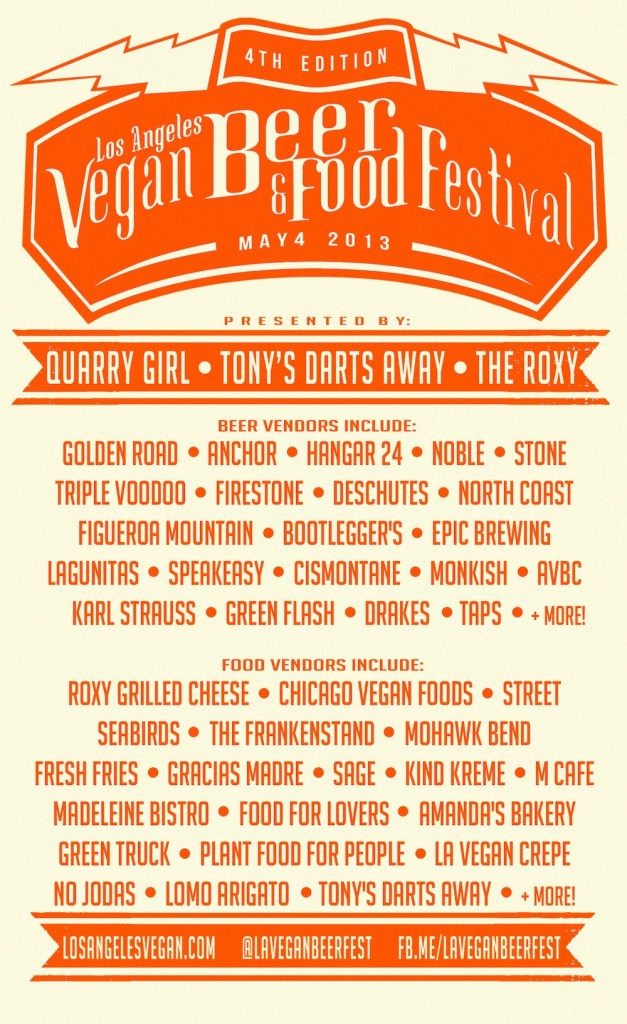 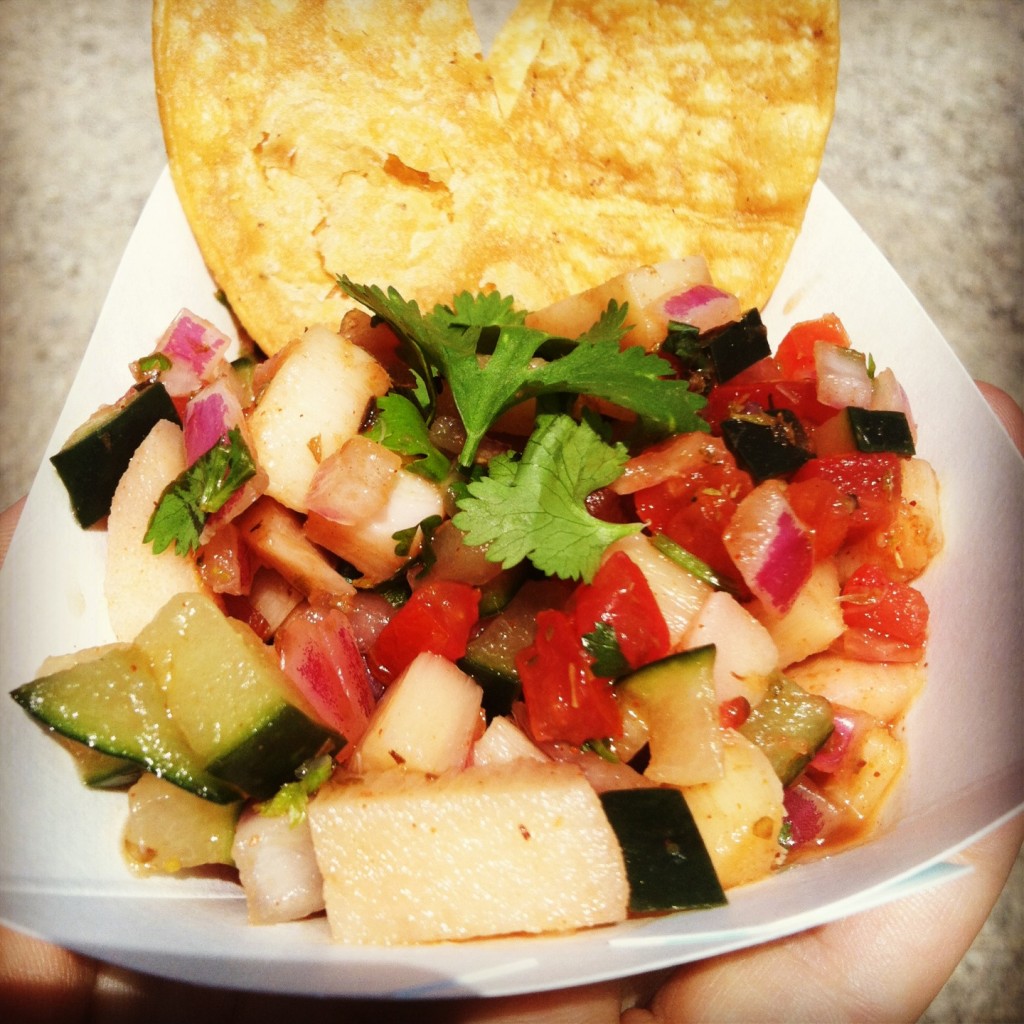 First vegan ceviche I’ve had and it was really great. 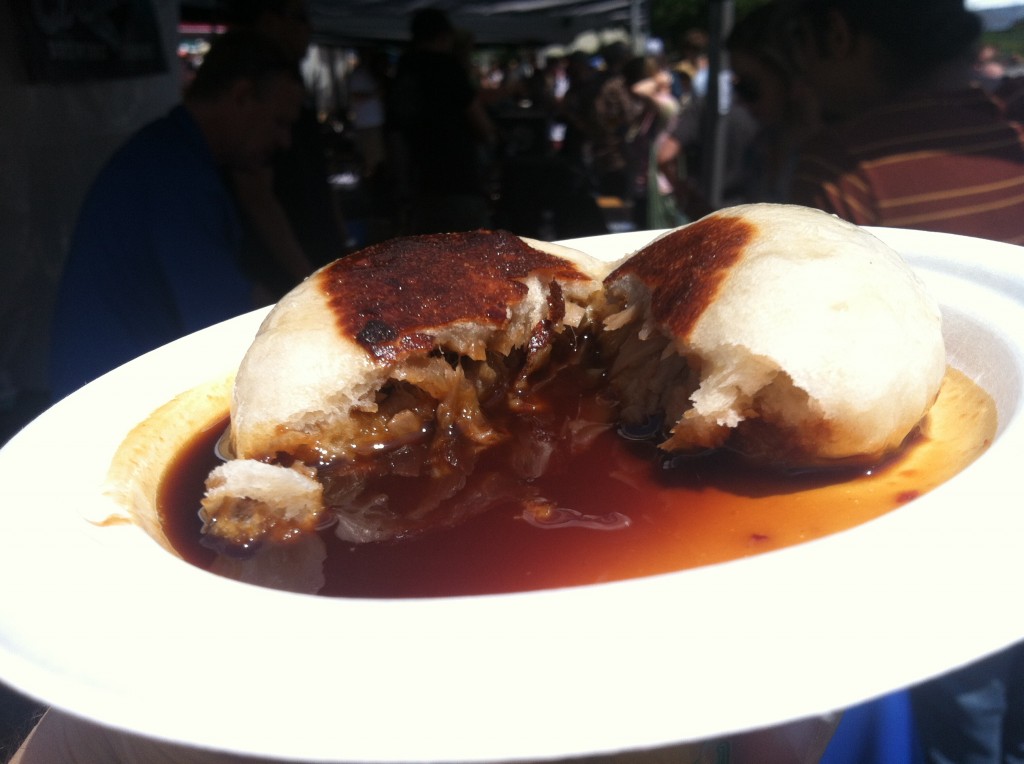 This was pretty good, but I wasn’t blown away. I’ve been meaning to check out Street for a while, they seem to have a lot of awesome veggie options. 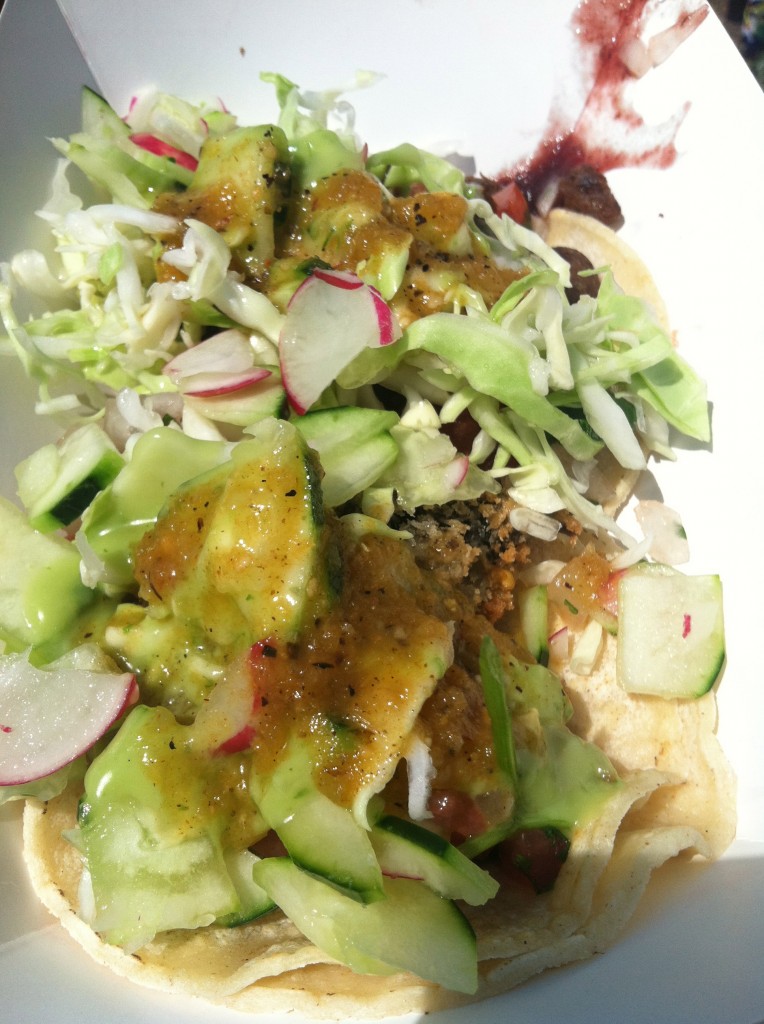 This picture doesn’t do justice to how good these tacos were. The portobello was battered and fried like a fish taco and I don’t even know what was going on in the carnitas, but the marinade was excellent. Gracias Madre isn’t in LA yet, but it’s supposed to be coming at the end of 2013 from the team at Cafe Gratitude. 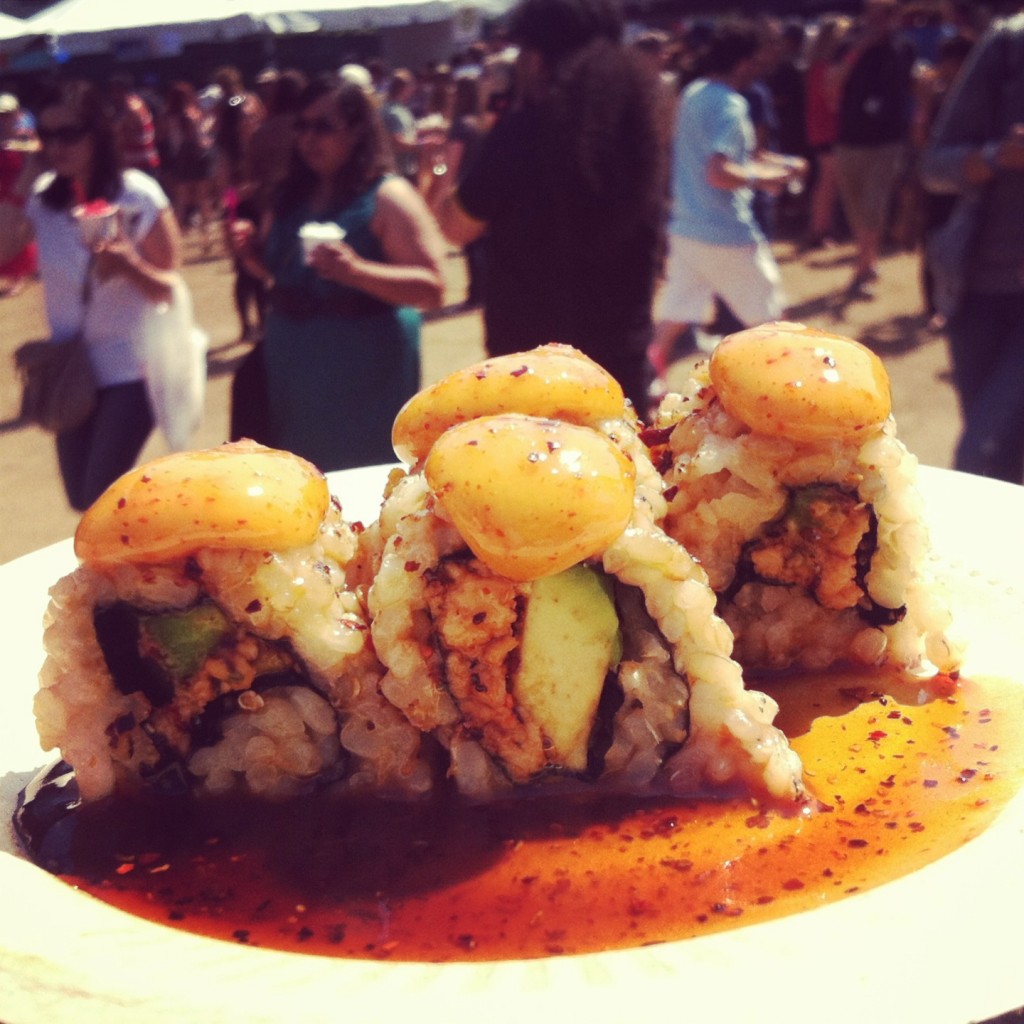 At this point I was getting pretty damn full, but the beer drinking was helping to keep my appetite going. This vegan sushi was really, really good. It was a “spicy tuna” and avocado on the inside wrapped in brown rice and topped with a spicy mayo. It sat in this spicy soy-like sauce. I didn’t know about Shojin before and now I must go there. 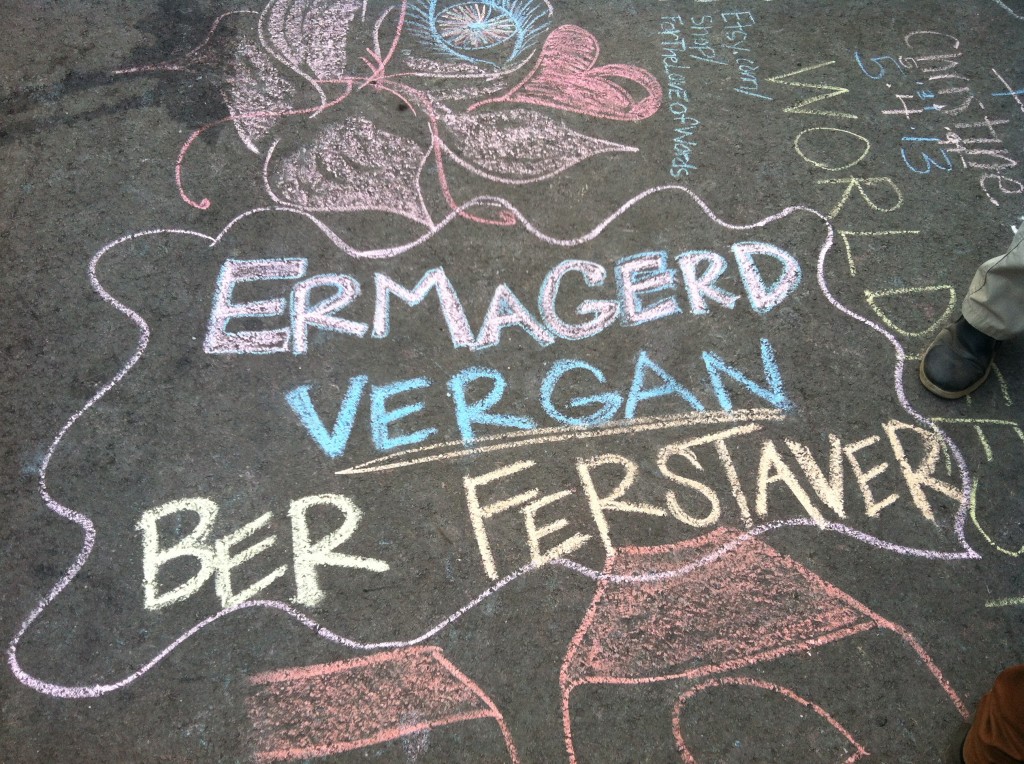 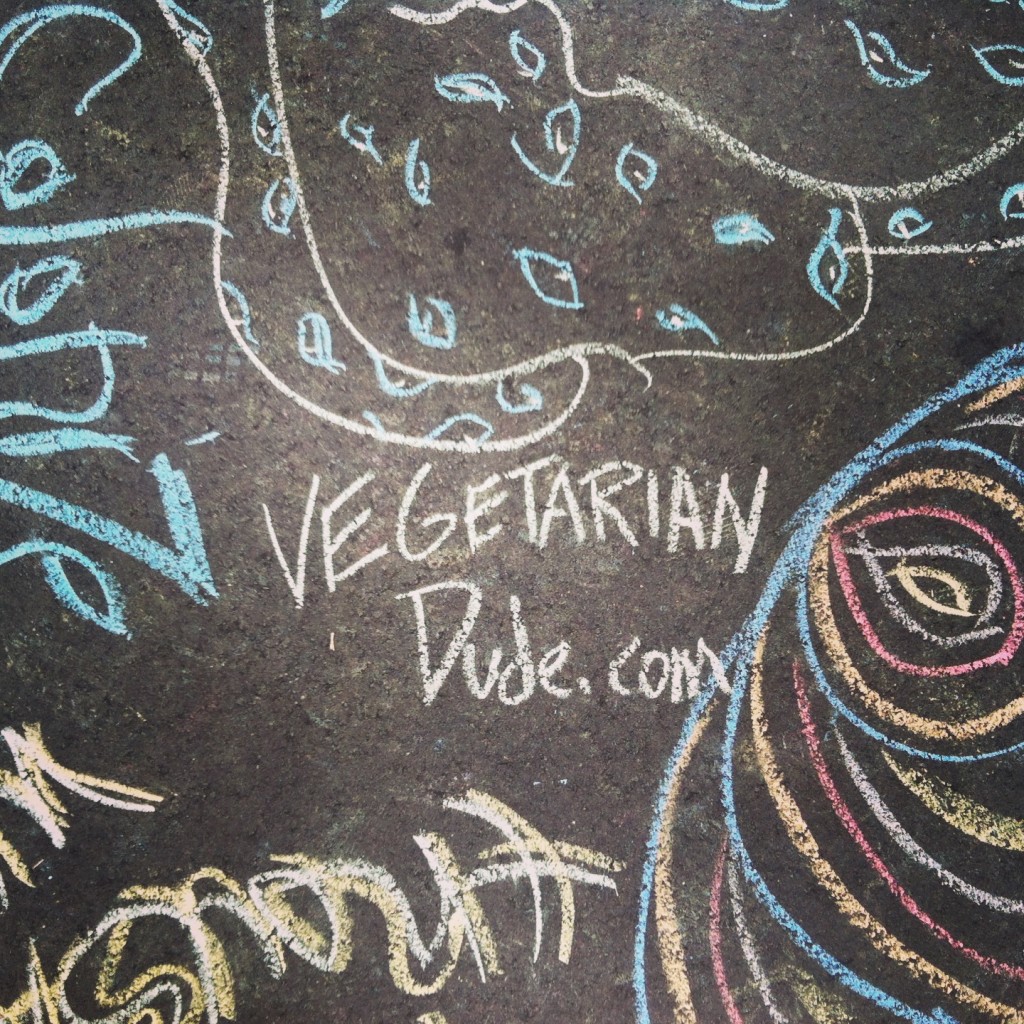 And I’ll end with my shameless self plug that I drew in chalk on the ground in multiple places. If you found out about my blog from this, let me know!

The entire experience was awesome and I will definitely plan on attending next year if I’m in town. I’d highly recommend you check it out if you are a fan of good food and beer regardless of if you are vegan or vegetarian (but especially if you are).

Were you there? What did you think? Have any questions? Let me know in the comments below!

Street is worth a try, It’s stupid loud in there but you won’t care because you’re still young. One of my favorite things there is actually the free table snack! Plus the Kaya Toast…a must! (If you are still eating eggs that is).

I will definitely try it out sometime soon! I am still eating eggs so I will stick the Kaya on my list. I also heard they just started doing a brunch on the weekends, might be the one to check out.