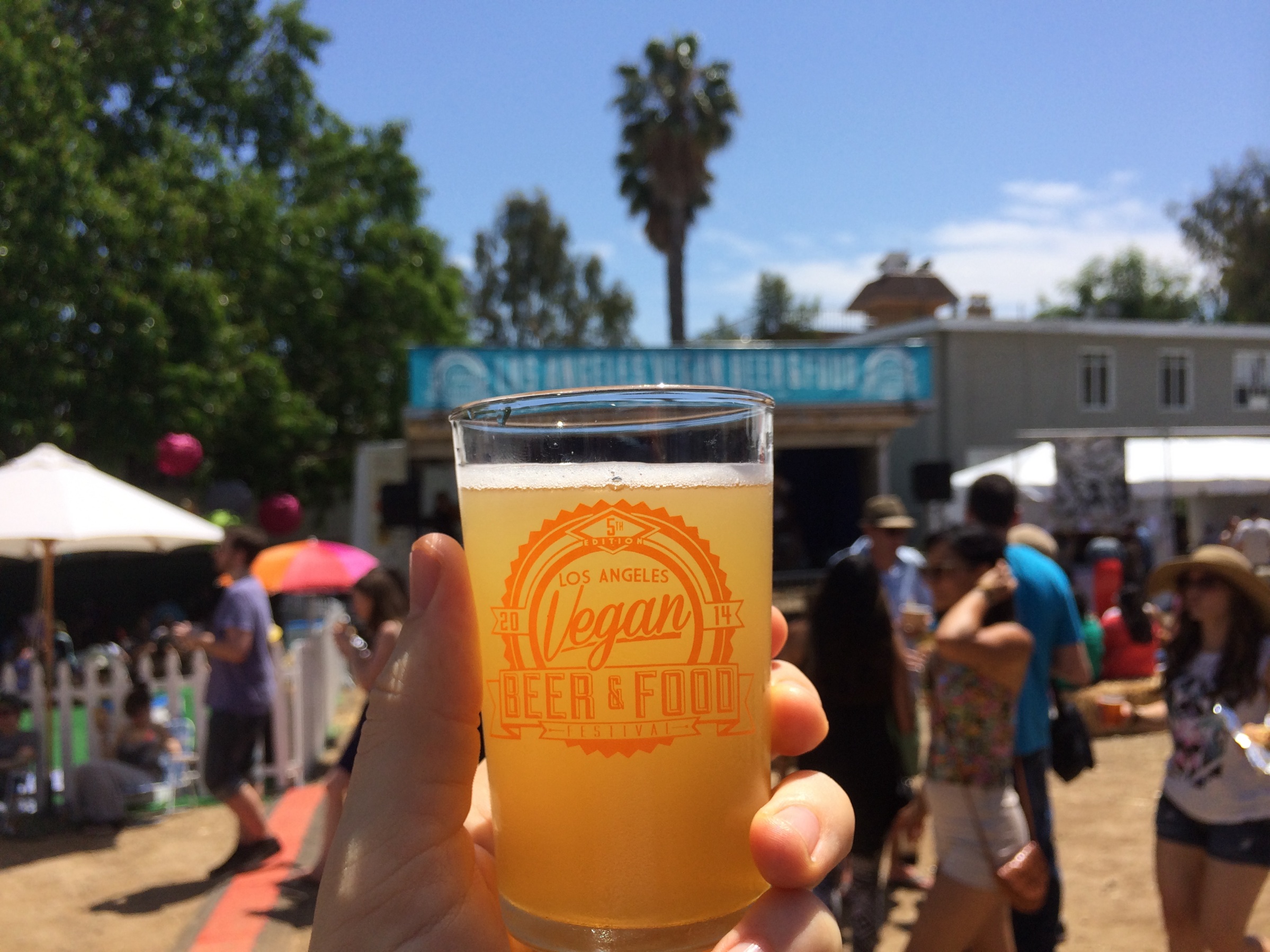 It’s that time of year again. The Los Angeles Vegan Beer and Food Fest was this past weekend and it was every bit as excellent as last year if not better. The organization was stronger, I personally thought the music was better and it was easy to get all the food and drink I could handle. Enough logistics, lets get to the goods.

Here is the checklist card they give you when you walk in with the full food, drink and entertainment breakdown: 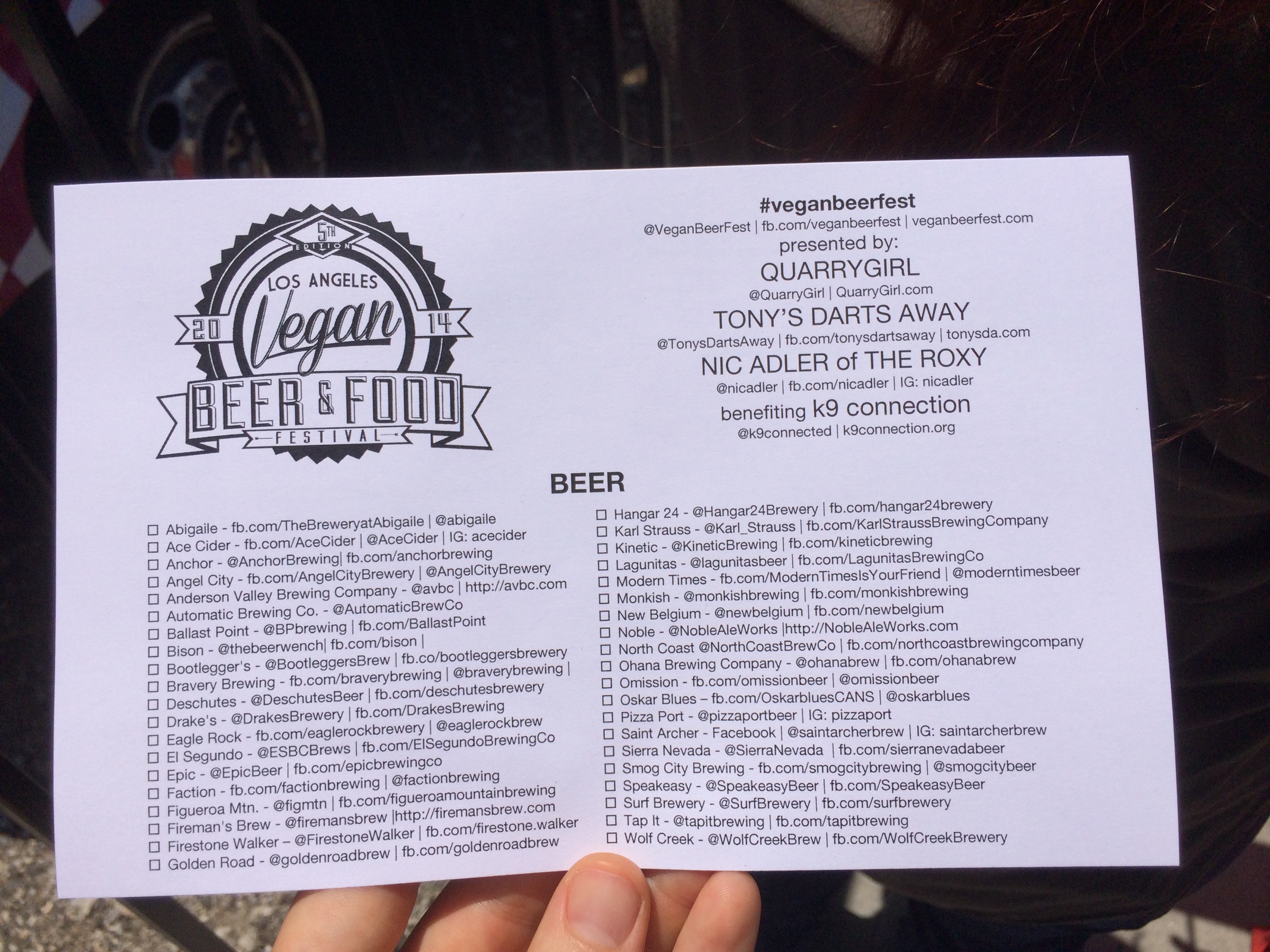 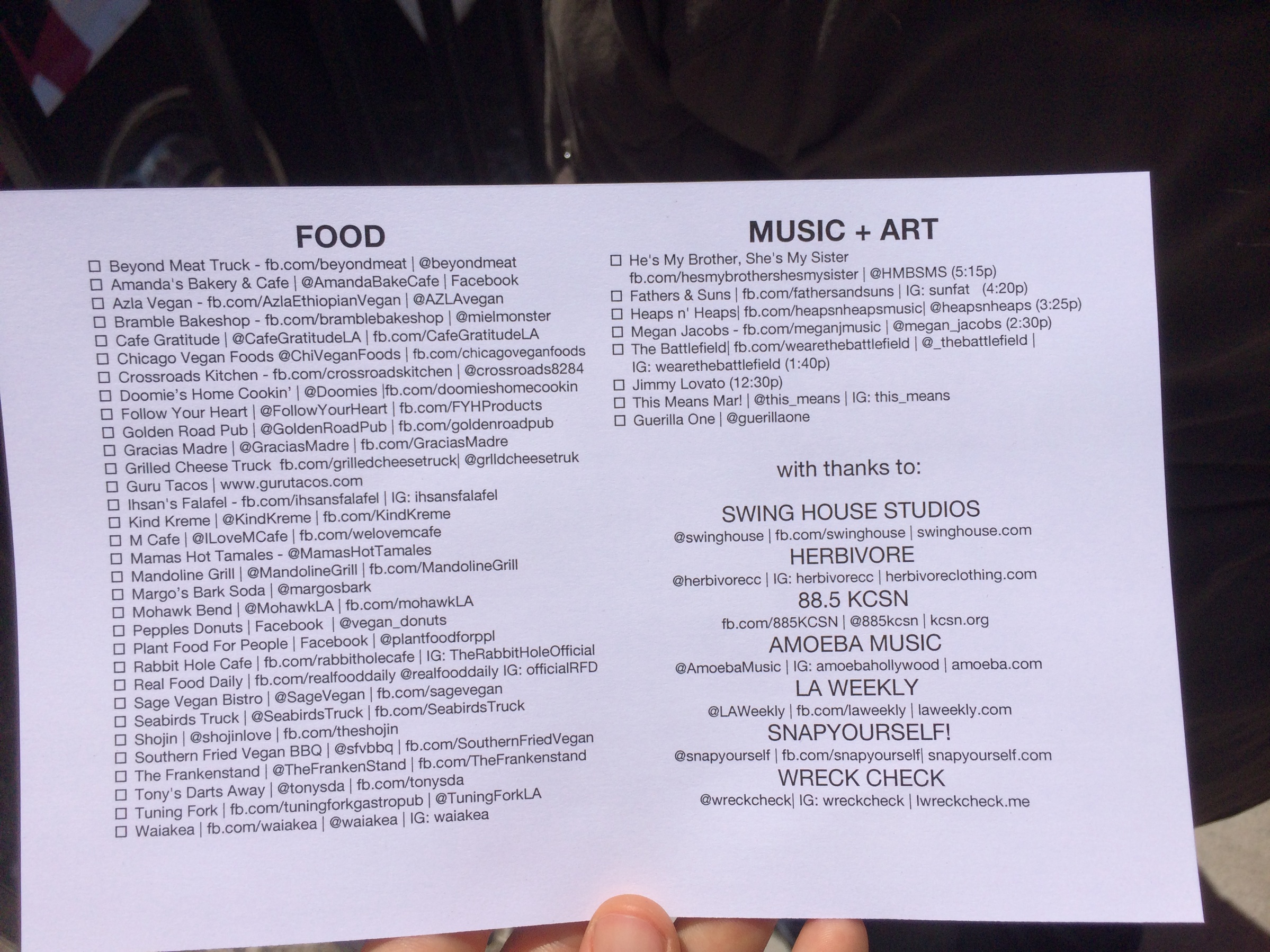 I had thoughts of filling this out, but they went out the window once the beer hit the lips.

Up first was the potato skins from Crossroads. I’ve haven’t been yet, but I’ve heard amazing things so I wanted to make sure I got to check it out before my taste buds got to overloaded. 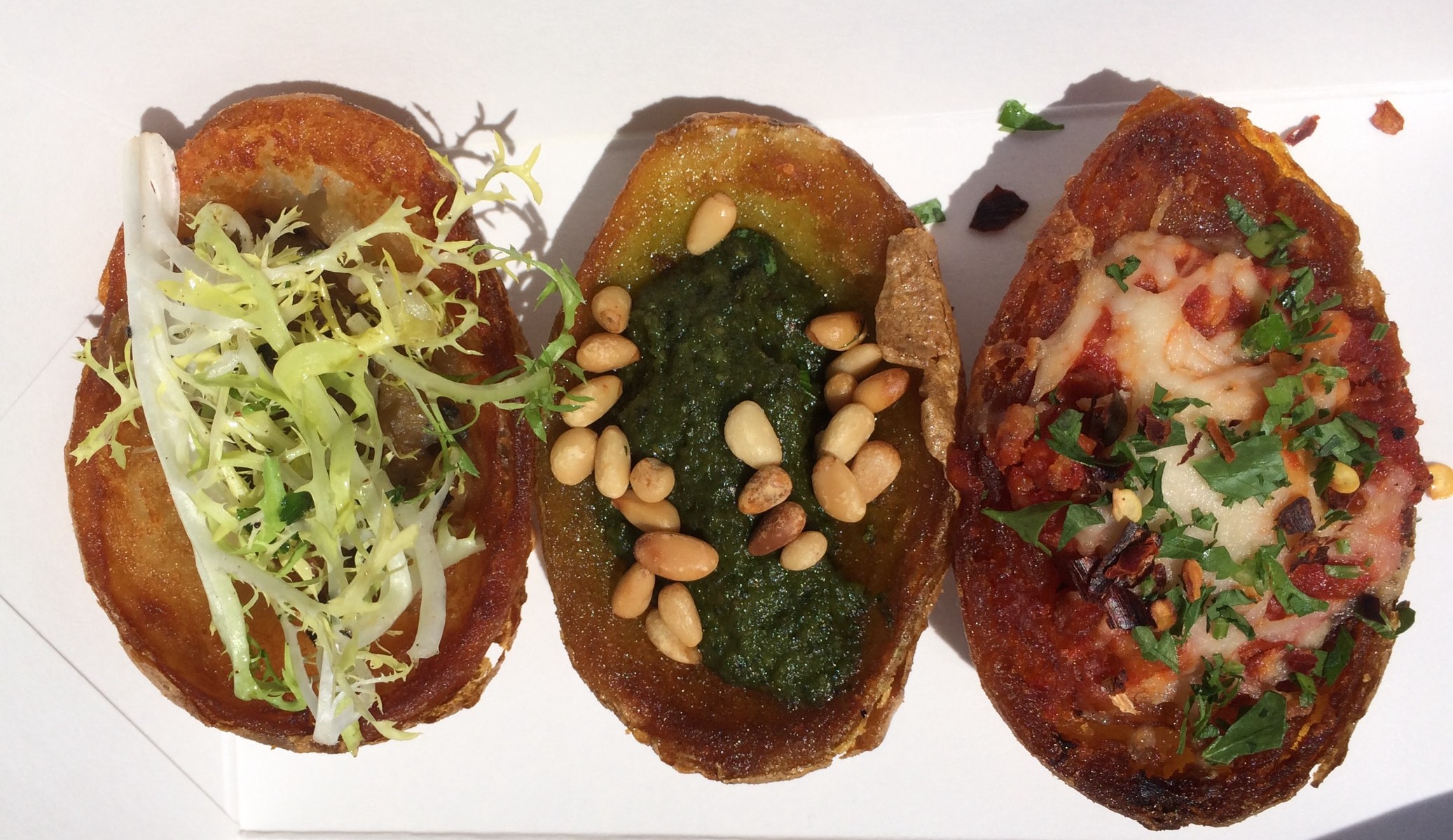 You got three varieties per $8 order. The kale pesto, bolognese with soy mozzarella, and a truffle leek pate with frisée deal. I was hoping for a bit more from them and heard that echoed around the fest from others who had been to the restaurant. It was still tasty, the kale pesto was my favorite. Just didn’t blow my mind. 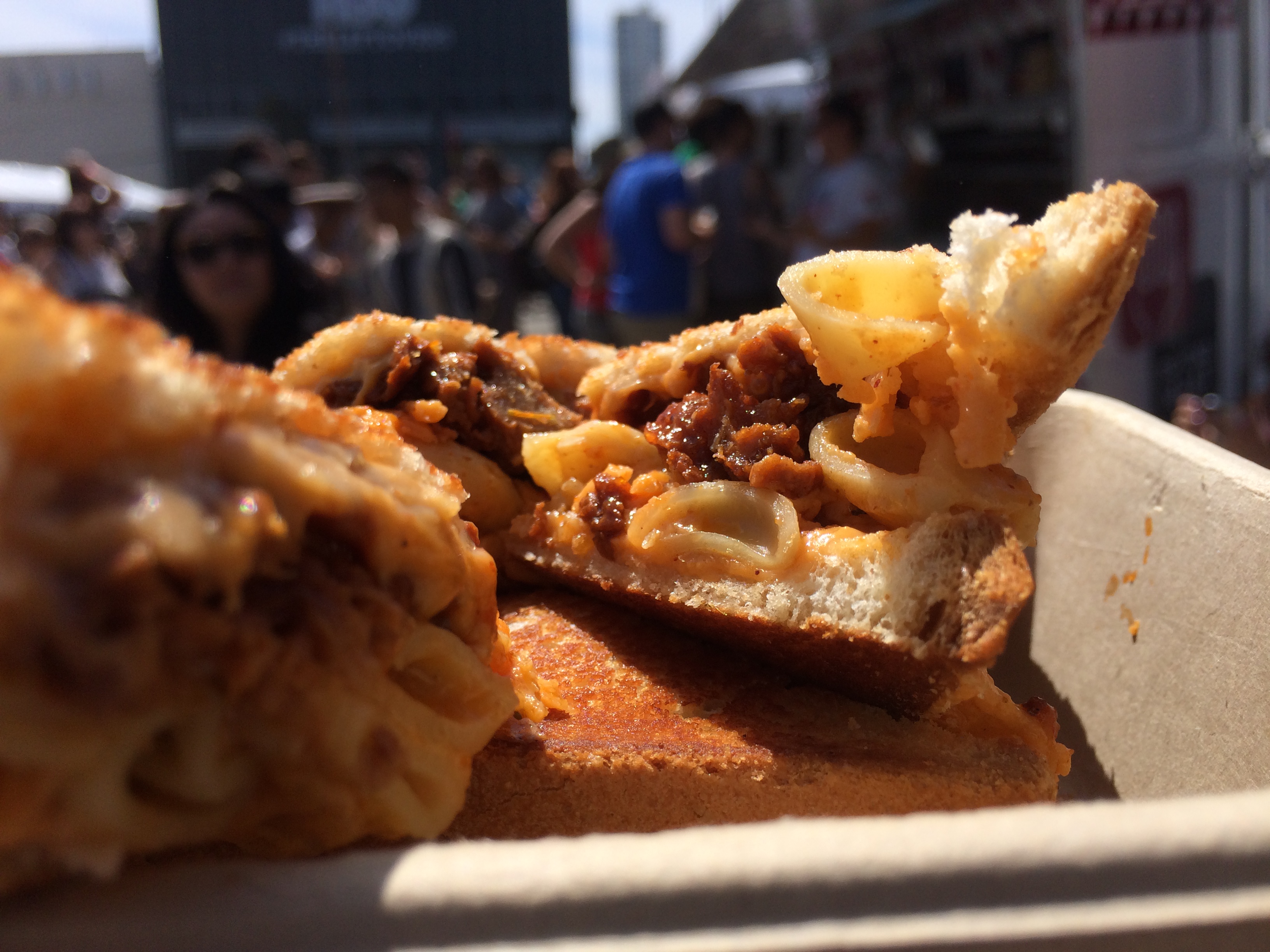 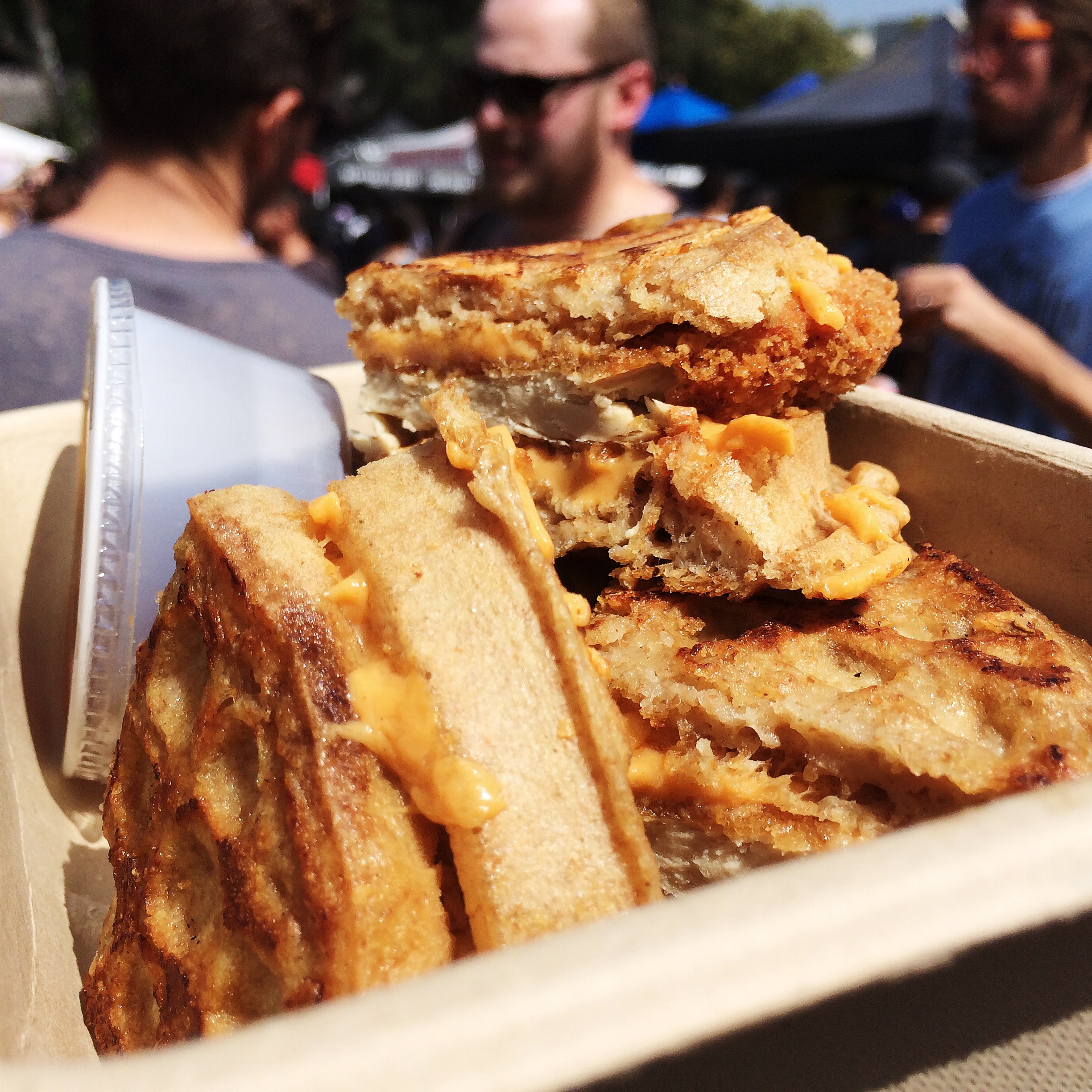 I first tried Gracias Madre last year at the fest before they were in LA and was instantly hooked. Since they opened I’ve only been once, but it was delicious. Might be one of my favorite vegan places in LA. Will need a few more visits to solidify. This year they had this coconut ceviche tostada that was killer. 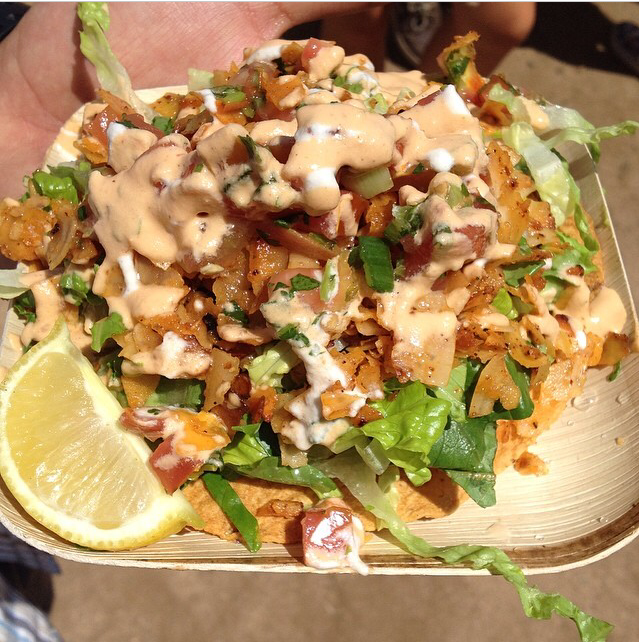 Also first discovered these guys last year and had to come back for more. It was actually kind of difficult to find them because they didn’t have an obvious sign. Determination and sushi craving can solve most problems and eventually I found their tent. I got the dragon roll, but the scallops also looked really delicious. They were pre-made and then added the sauce/fire before they were served. 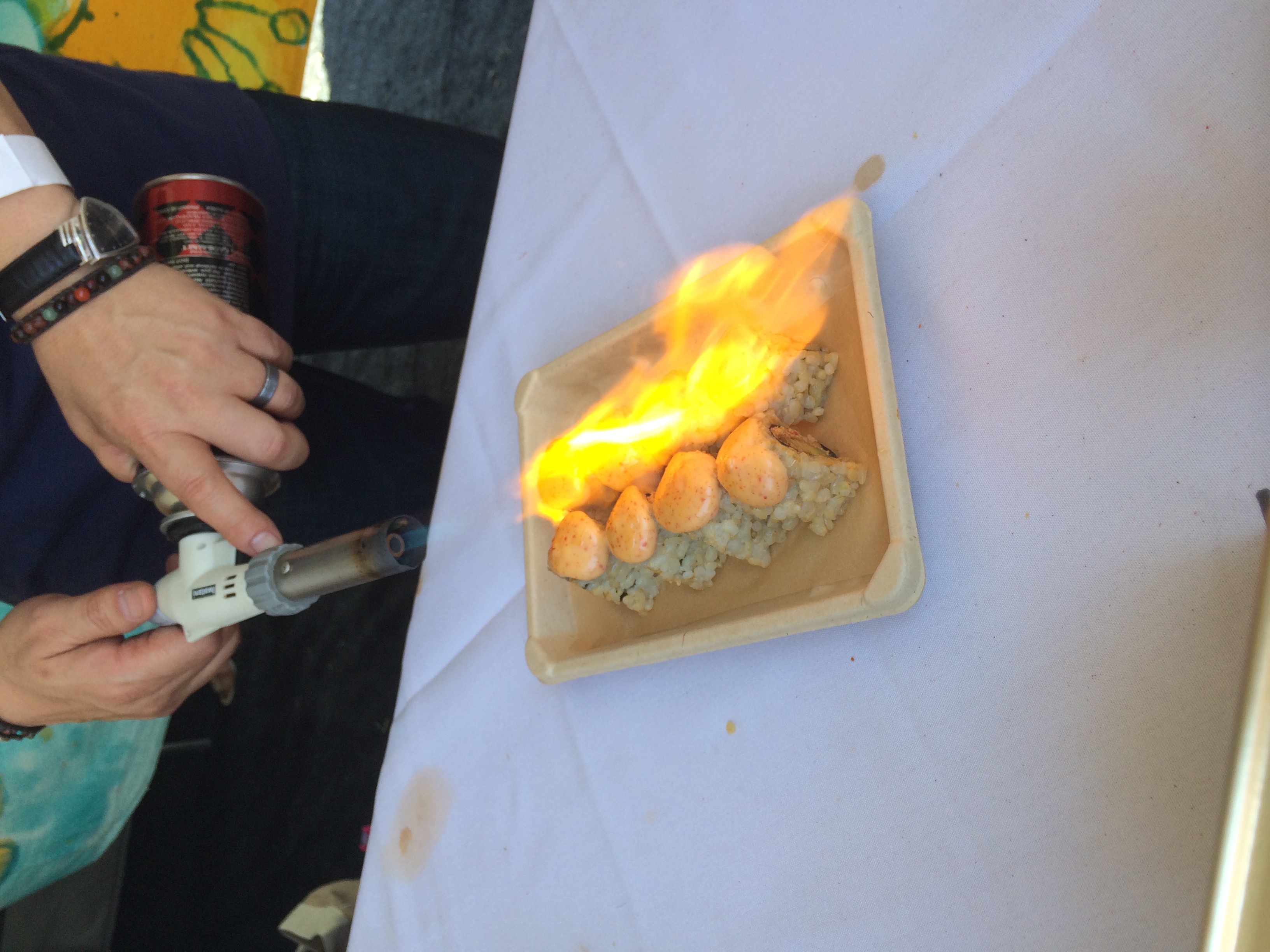 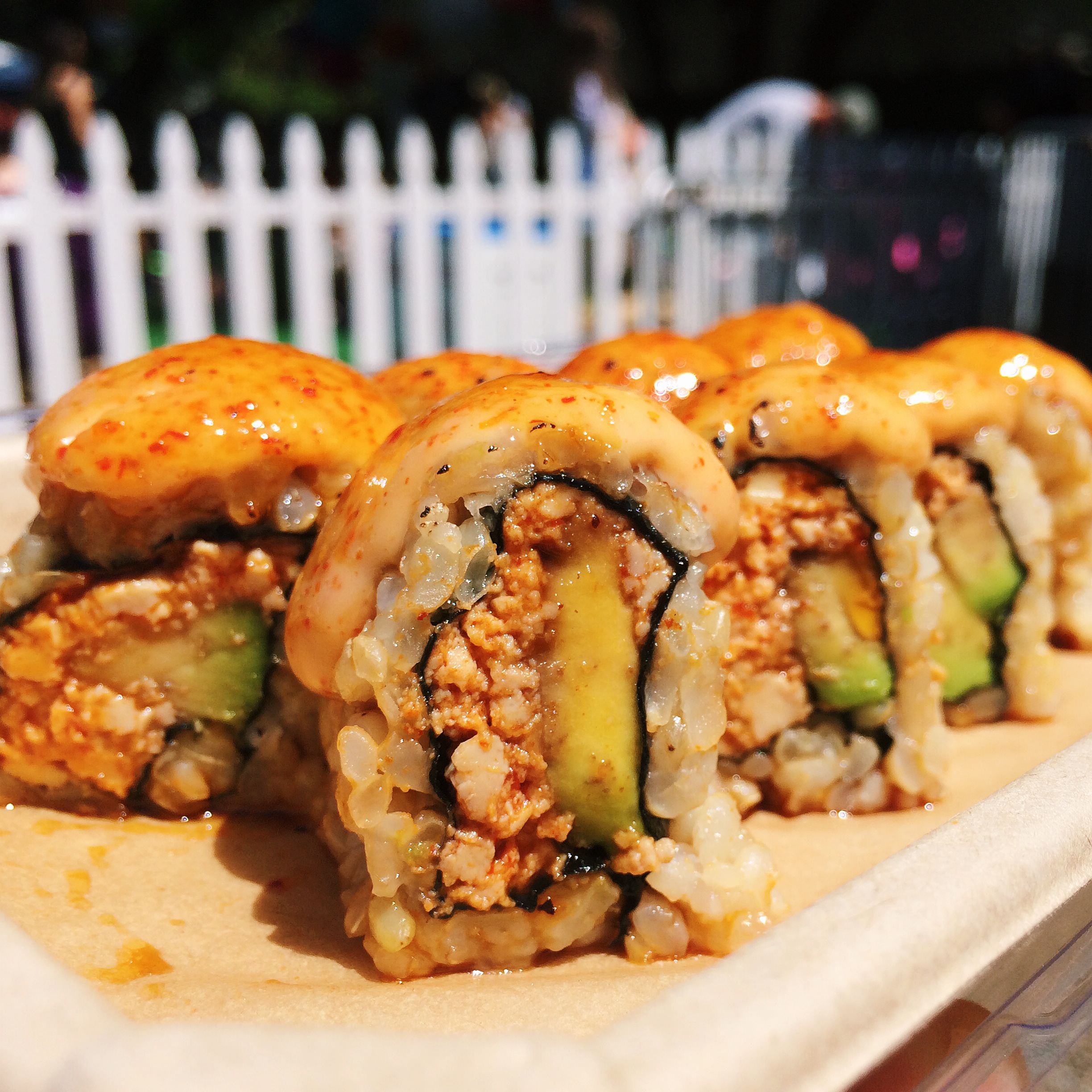 They had a quesadilla and vegan cronuts (croissant donut for those non-foodies out there). I liked the quesadilla and thought the cronut was just okay. It had a strong orange flavor and apparently there was a vanilla one that must have been sold out by the time I tried it. I definitely would have been more into that. The quesadilla was good and taken up a notch by the mango salsa.

They had a “tu-nut” salad sandwich too that you can see in the picture, but I didn’t get a chance to try it. 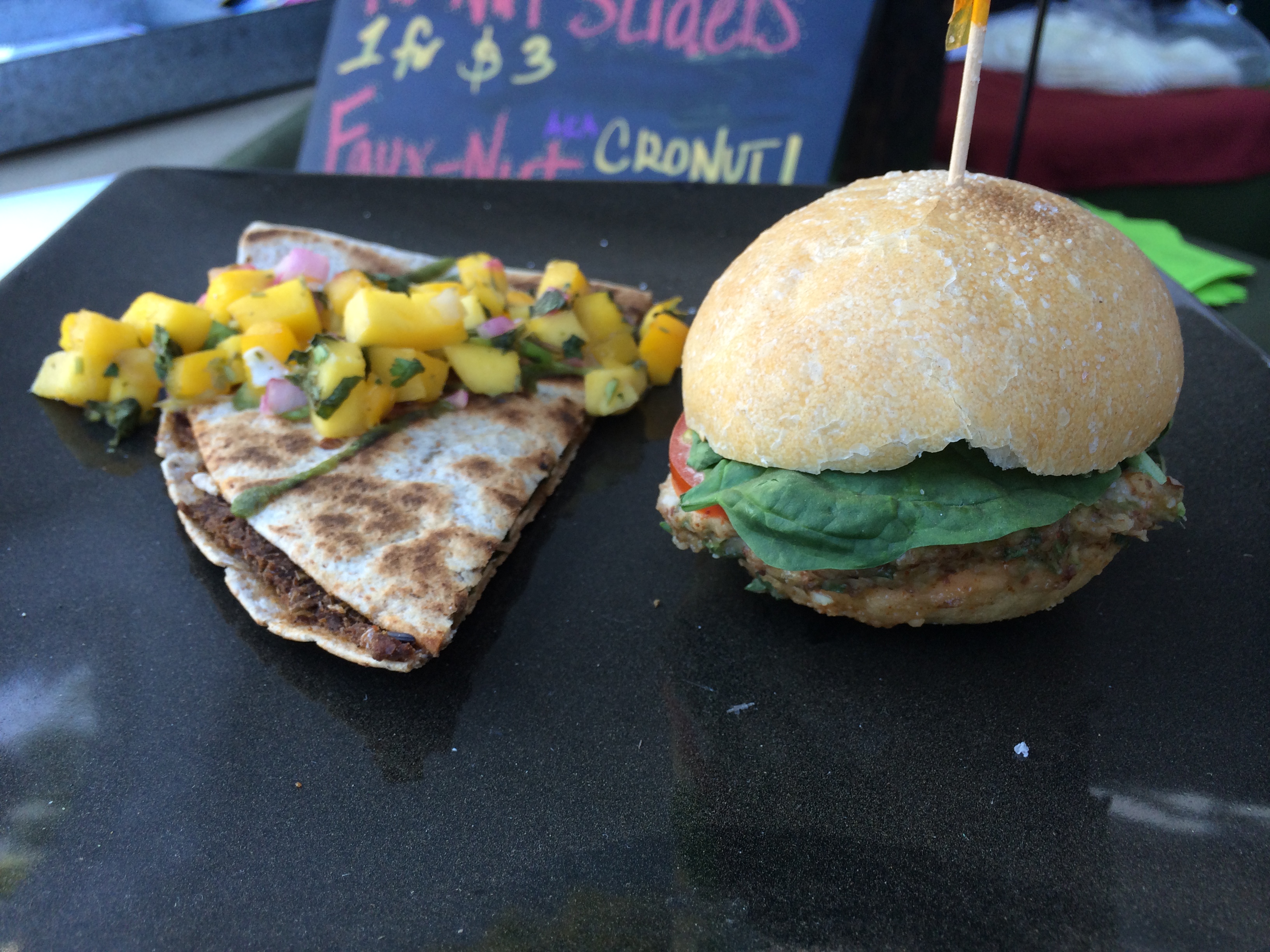 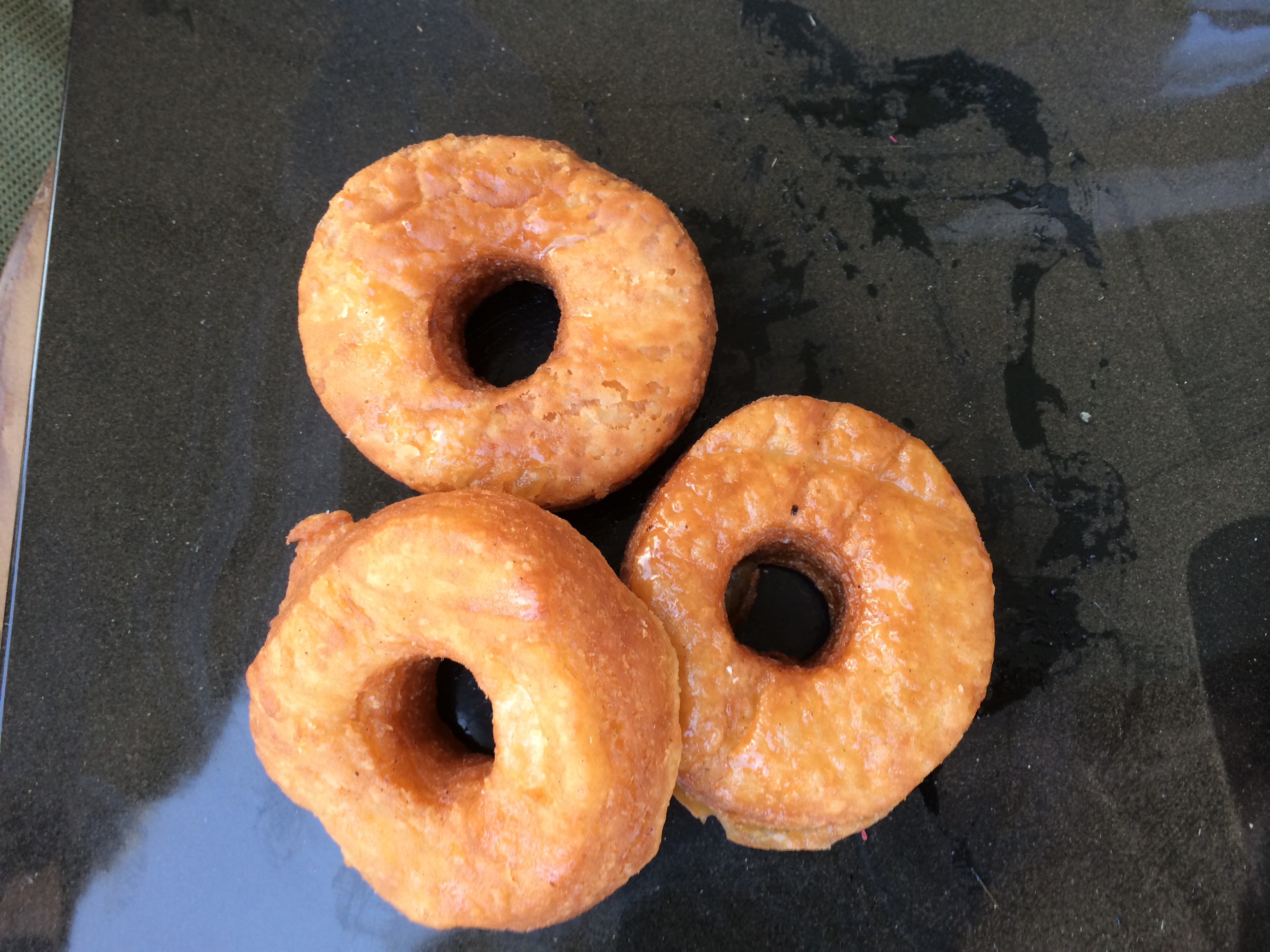 I had a bite of the Asian tots and slaw from Tonys darts away that was bomb. Also worth mentioning were the tasty grilled cheese samples from Follow Your Heart, the nacho cheese from Tease and the vegan mozzarella sticks from M Cafe. I didn’t get to try them, but Doomies Big Mac, Bramble Bakeshop peanut butter cups, Frankenstand, and Southern Fried Vegan BBQ all looked really great. Check out #veganbeerfest on Instagram and you can see some more drool-worthy photos.

Music-wise, check out He’s My Brother, She’s My Sister. They closed it down and were my favorite band of the day. Coattails was a great song.

What could be better?

Overall amazing work by Quarrygirl, Tony’s Darts Away and Nic Adler. Can’t wait until next year.

Are there no REAL healthy veg options? I’m all for beer, but disappointed in all of the “cheese/Meat” substitutions. This does not qualify as a great representation of what it means to be vegan. Most are poor substitutions of overly processed items to mock a taste.

There were healthy options as well, but it was more of an indulging kind of event then a health focus. There were salads, quinoa, juices, etc. I’m also not super into the fake meat, but I like the recreation of traditional meat foods using whole foods like jackfruit tacos and hearts of palm ceviche for example.