Let’s talk about beans, homemade beans, specifically, from dried. I prefer to do beans in the pressure cooker and it’s super easy and it tastes delicious. Dry beans can be very intimidating, especially when you first get them and you realize how long it’s going to take to cook and they’re soaking and there’s all these things involved.

First, don’t be intimidated. It seems like a lot, but really most of the time spent is just waiting. Soaking takes a little bit of planning. You soak it overnight and then it cooks a lot faster the next day. It also removes some of the gassiness that can come out of beans.

You do need to plan ahead though, but once you do, it’s a lot cheaper than buying canned beans. You have much more control over the sodium and the flavor of the beans, and it’s a lot more flavorful because you can actually infuse flavors into the beans when you cook them.

You can do this recipe with all sorts of beans. I used black beans in this recipe and I also will do the exact same recipe with pinto beans. Turns out similar, and you can mix and match the things that you’re including in there. You can do more or less chilies. The cinnamon obviously gives it an interesting different flavor.

The basic basic is just salt. Literally just the same amount of beans, a teaspoon of salt, water. That’s the basic, but then you can add and do all these kinds of fun things with those beans and they store really well. I’ll keep some in the fridge and I’ll also do individual one cup containers in the freezer. You could just take them out and defrost it overnight. Again, you get a lot out of this and it’s really nutritious, inexpensive, and super versatile. So highly recommend experimenting with making your own beans.

Let me know what you think of the recipe in the comments below! 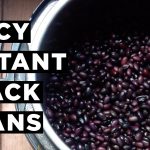 Vegetarian Dude Let’s talk about beans, homemade beans, specifically, from dried. I prefer to do beans in the pressure cooker and it’s super easy and it tastes delicious. Dry beans can be… Print This
Rating: 5.0/5 ( 1 voted )

How To Get The Men In Your Life...

Which Olive Oil Is Best?