I used to be a meat eater and I have a laundry list of foods that I enjoyed. Most of the time it’s the flavor, which can be pretty easily recreated in sauces, etc. But sometimes it’s the flavor/texture combination, and that’s the case with pulled pork (or any pulled meat). There are substitutes that you can buy in the store, but they are stuffed with soy and wheat gluten and what’s the fun in store bought?

One thing that really facinates me about vegetarian cooking is figuring out how to create classics (or substitutes for classics) using just veggies and not the meat substitutes you find in the store. Especially for sandwiches because you end up with a wheat on wheat experience which leaves you feeling super stuffed.

This recipe came to mind when I had some people over at my house for a barbecue and I was tired of the standard veggie burgers and wanted to do something different. I had recently become familiar with the oyster mushroom and had the aha moment when I realized that you could “peel” them and get strings of mushroom. This takes some time, especially with 2 pounds of mushrooms, but when cooked down this resembles the pulled meat texture and mushrooms are awesome at soaking up flavor flavs so it seemed like the perfect fit.

I cooked it in the 3-quart part of the Lodge Logic Pre-Seasoned Combo Cooker (which is awesome BTW) that I found out about from The 4-Hour Chef by Tim Ferriss (also awesome). I think the cast iron gave it a nice additional flavor, but it would also work in a regular pot or slow cooker. 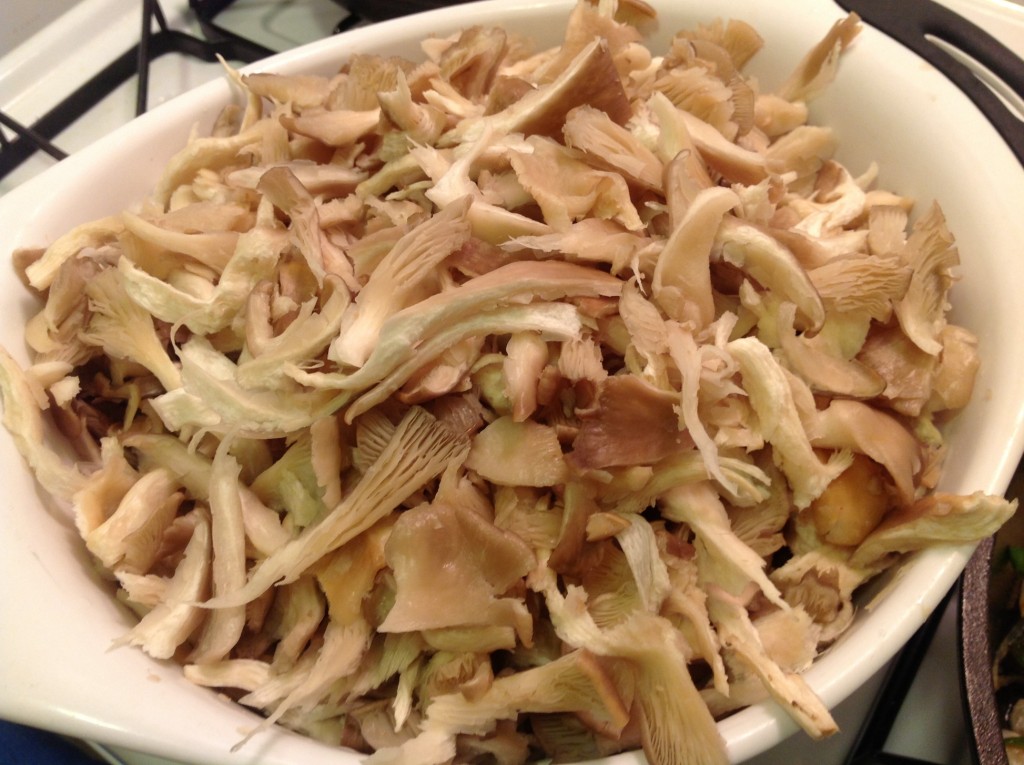 What do you think?? What did you change? Did the carnivores respond? Did this totally suck? Let me know below!

Note, if you are a lazy meat eater, this is a great way to get that similar pulled pork texture and taste in an hour instead of 6 hours! 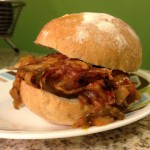 Wonder if this could be made in a slow cooker

Definitely could! I actually tried it in a slow cooker the first time I did it!

Will you please make this for me sometime? 🙂

This sounds amazing! I was dreaming of a vegetarian pulled pork recipe today and found this! Can’t wait to make it!

Let me know how it turns out!

Wow. Thank you so much for sharing this. Great recipe. I absolutely love it. It is quick. It is comfort food. It tastes great. Perfect for summer. I took a picture of the open faced sandwiched that I just made from this recipe and shared it online.

Awesome! Thanks for the comment Christopher. Do you have a link to the photo you posted? I’d love to check it out.

All good, glad you enjoyed it enough to share!

CJ, Cody and I enjoyed this for dinner tonight. We made it in a wrap. Thanks for posting weekly recipes. I look forward to checking my email every Monday night when I get home from work.

Awesome! Thanks for following and commenting! Glad you liked it!

Going to try this on the smoker/grill today! I too am getting tired of bringing veggies burgers to cookouts. Was excited to find this recipe! Thanks for sharing.

Awesome! Thanks for the comment Tiffany. Let me know how it turns out or if you modify it someway!

I cooked the recipe as written then threw it in a pan on our smoker. Holy Toledo, was that ever good!

Hi,
I was wondering what the consistency was. I’m not a huge fan of mushy things. Does it hold up well? Thanks, CJ

It does hold up pretty well! If you want them a little firmer, I would check the consistency at about 10-15 minutes and see if that works for you. The longer you let the mushrooms cook, the more of the flavor they will soak up, but they will also get mushier I thought 20 minutes was a good sweet spot.

Hey Amanda! Thanks for the comment! I love the idea of a little vegetarian side car slow cooker. When I did it, I went for about two hours in the slow cooker. Let me know how it turns out!

This is the nicest and most thoughtful comment I’ve ever read.

This is perfect. I was looking for a veg option to serve at a BBQ alongside pulled pork. It is going to be a casual, grab food when you’re hungry affair so I was hoping to hold this in a slow cooker on warm. I want to cook it in a pan to get some caramelization (flavor) and then just keep it warm in the slow cooker for people to eat when they’re ready.

How do you think it will hold up? Should I cook it a bit less in the pan maybe so it doesn’t get too soggy while in the slow cooker?

Hey Jason! Glad you’re gonna go for it! Good call on going in the pan first then slow cooker. If you keep the slow cooker on the lowest setting, you should be fine. The oyster mushroom strips can hold their shape pretty long.

Let me know how it goes!

My second time making this; it is so fabulous! Nice to throw on the smoker while my hubby is cooking his pulled pork. The mushrooms, peppers and onions love to soak up that smokey flavor. Yum yum yum!

I am vegetarian and will try to make it for my boyfriend who is a meat eater and dislikes mushrooms lol. The trick is to make it not taste like mushrooms for him. I wonder if I can use liquid smoke to add the smoky flavor. And use a grill pan to make it? I have a slow cooker but not sure if thats practical time wise on a Wednesday.

Hey Sabrina! Haha, I hear you on the mushroom masking. I have had friends that were not traditional mushroom fans who enjoyed this quite a bit. The sauce and marinating with the peppers and onions blends a lot of that flavor together. A grill pan should be fine and a little bit of liquid smoke would go a long way. You can also season it with smoked salt for a similar effect. Let me know how it goes!

Making this tomorrow as a vegetarian addition to our pulled turkey, after sludging through three stores in the pouring rain, I’ve resorted to thinly slicing portobello mushrooms…kinda nervous on making the change up…..

Hey Jen! It will still taste good, you just won’t quite get the pulled consistency. Let me know how it turns out!

This was EXCELLENT!!! Very delicious!!

Thank you! Glad you enjoyed it!

This sounds terrific! I’m having a casual holiday affair with pulled pork as the buffet main. The vegetarian couple in our group are not fans of spicy dishes and I’m wondering if I could omit or substitute the peppers. Or do they not add too much heat. My pulled pork tends to be on the smoky sweet side and I’d like that flavor in the mushroom dish.

Apologies for the epically delayed response. If you are planning on doing another holiday affair this year you could definitely omit the jalapeno peppers. or just use green bell peppers in their place.

So your probably sick if hearing how awesome this recipe but…IT IS AWESOME!!!

When we first went vegan a few years ago I was craving a BBQ pulled “pork”. This happened to be my favorite, especially while living in FL during college. So, I looked up a recipe and found one with Jackfruit. Not only did this recipe take forever to make, with dehydrating the fruit and dry spicing it, but it was far too sweet and way too mushy. I thought my dream of making a vegan BBQ “pork” was dead until YOUR RECIPE!

My coworker brought a bunch of oyster mushrooms today into work and my husband stumbled upon this recipe. It was fate.

You have set a new bar for vegan food and for that I take my hat off to you sir. Well Done!!!

Hey Katrina! I never get sick of hearing it, haha. Thanks so much for sharing your experience!

I made this to go along with smoked pork shoulder for a group … a lot of the meat eaters were interested and tried it … suggestion was that this would top a burger really nicely … I ate the leftovers and enjoyed it.

I just made this, it’s very reminiscent of pulled pork and really tasty. I thought I would share a change I made since I didn’t have ready access to fresh oyster mushrooms so maybe it might help others. I just used regular button mushroom and shredded them with a hand grater the texture was awesome.

That sounds excellent! Thanks for sharing!

I was making a brisket for my family today and I wanted something similar, however I do not eat meat so I did a little google search for a vegetarian version of pulled pork that was not jackfruit, seiten or tofu. Your recipe intrigued me as I love mushrooms. I did not have oyster mushrooms but I did have portobello mushrooms so I decided to substitute, I sliced them about a 1/4 in sauteed them just a couple of minutes with the other veggies then threw them in a crockpot with the sauce for five hours. The texture was perfect, they did not turn to mush. I have a teenage son who practically lives on Dunkin and McD’s, for some reason he decided to try it and he said it was pretty good. That says a lot about this recipe. Thank you for sharing!

Thanks for sharing! Love this with the portobellos as well. And that’s great that your son was into it.

Hi, thanks for posting this recipe. I just made it and it was delicious! I made a chipotle sauce and added that to the mushrooms. I spooned it into corn tortillas and garnished with cilantro–yummy tacos! My pork eating friend said they were better than carnitas!

Love it! All about the addition of the chipotle flavor. Would be tasty with some cashew sour cream as well 🙂

I made this recipe without jalapeños, and used King mushrooms instead. The king mushrooms shred easily into long strips that look like pulled pork. The recipe was delicious and a big hit in my house!